AMP clamp meter !! With technological advances in electrical equipment and circuits come more challenges for electricians and technicians. These advances not only require more capability in today’s test equipment but also require more skillset for technicians who handle such works. An electrician who has a good grounding in the fundamentals of test equipment used will be better prepared for today’s testing and troubleshooting challenges. The amp clamp meter is one such important and common tool found in the toolboxes of electricians and technicians alike. 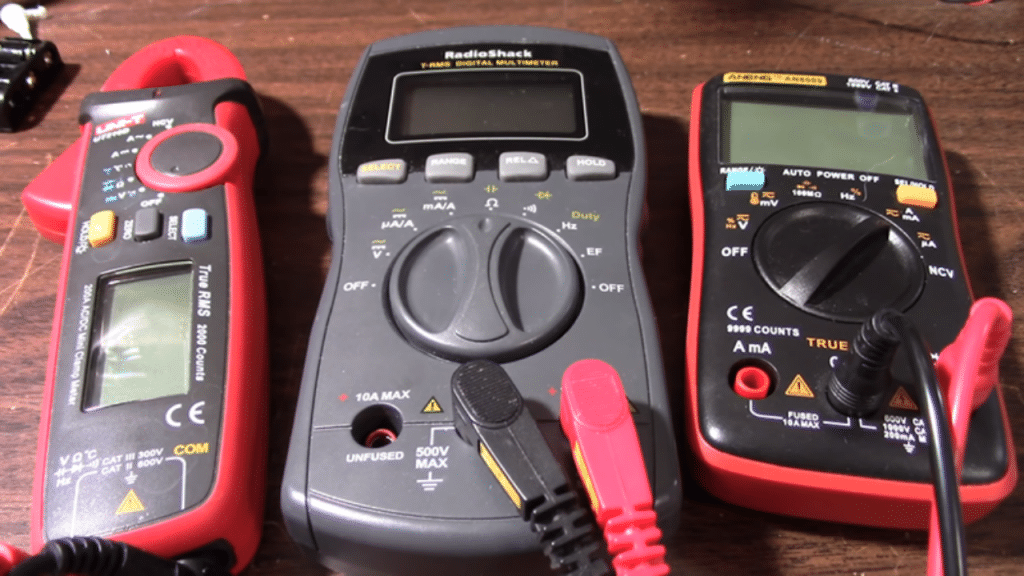 What Is an AMP Clamp Meter?

An amp clamp meter in electrical and electronic engineering is an electrical device with jaws that open to allow clamping around an electrical conductor to measure the current in a conductor without the need to make physical contact with it or to disconnect it for insertion through the probe. Current clamps are used to read the magnitude of alternating current (AC), and with additional instrumentation, the phase, waveform, and temperature can also be measured, some clamp meters can measure currents of 1000 A and more. Hall effect and vane type clamps can also measure direct current (DC). 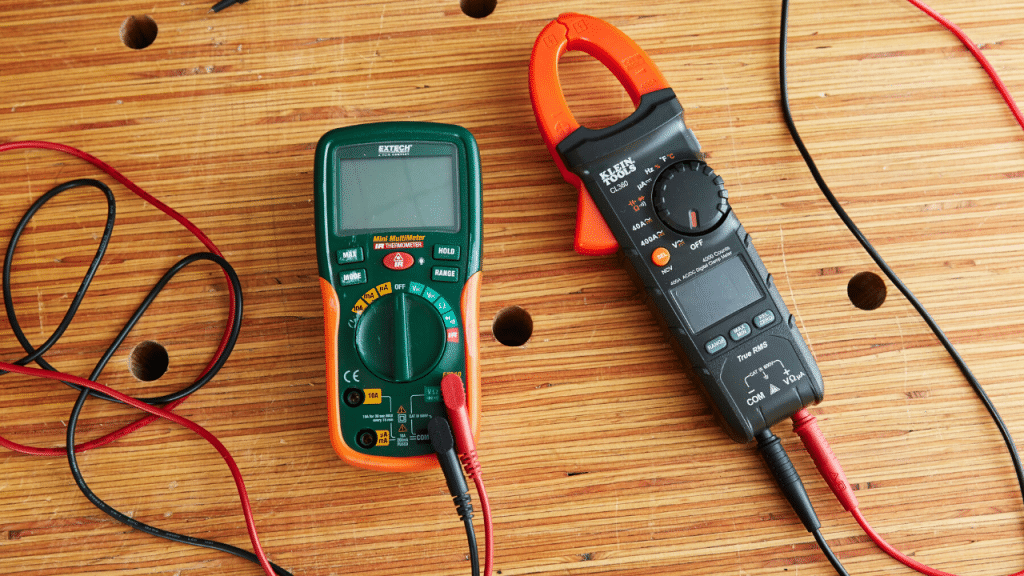 Types Of The AMP Clamp Meter:

As we know an electrical meter with an AC clamp is known as amp clamp meter, which is capable of measuring the vector sum of the currents flowing in all the conductors passing through the probe, which depends on the phase relationship of the currents. A common form of current clamp comprises a split ring made of ferrite or soft iron. A wire coil is wound around one or both halves, forming one winding of a current transformer. When measuring current, the subject conductor forms the primary winding, and the coil forms the secondary. 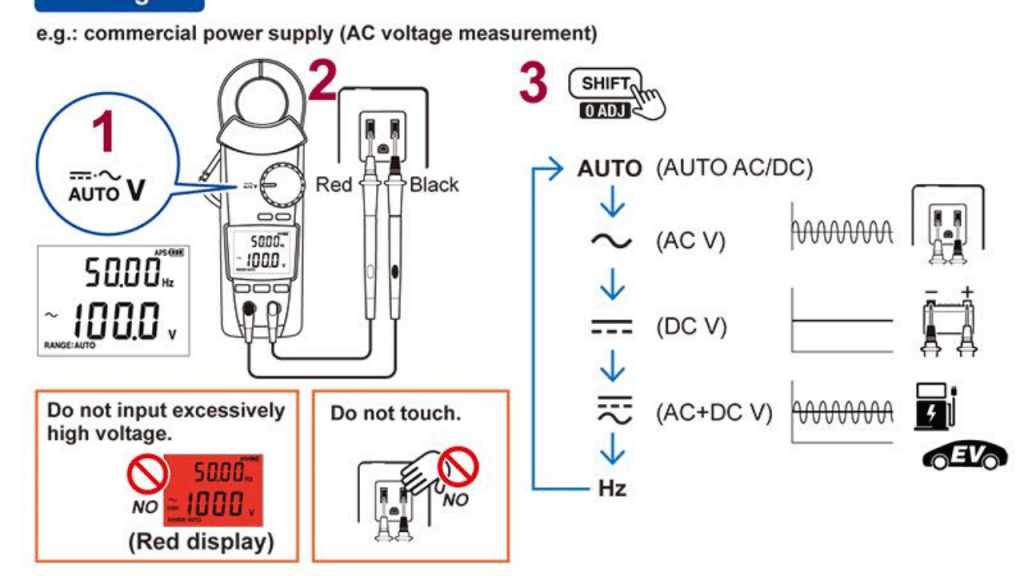 1. Clamp meter for automotive use:

It is capable of measuring only AC and is also called the current transformer clamp meter. It is the original type amp clamp meter.

This type of clamp meter can measure both AC and DC quantities. Most modern clamp meters that are available in the market today are of this type.

It is a special amp clamp meter that uses a helix-shaped flexible coil without a ferrite core inside to measure AC. It is a perfect choice for when you need to reach tight spaces.

A moving iron vane is used to measure true RMS value. It can measure both AC and DC but is an obscure meter used only in heavy industries.

The clamp meter as the name suggests uses a clamp or jaw for the measurement. It is placed around the wire where the measurements are to be conducted. It is used for measurement of AC or DC voltage, current, resistance, temperature, capacitance, etc. Being a very handy tool it has several benefits as it measures the current without disconnecting the circuit. 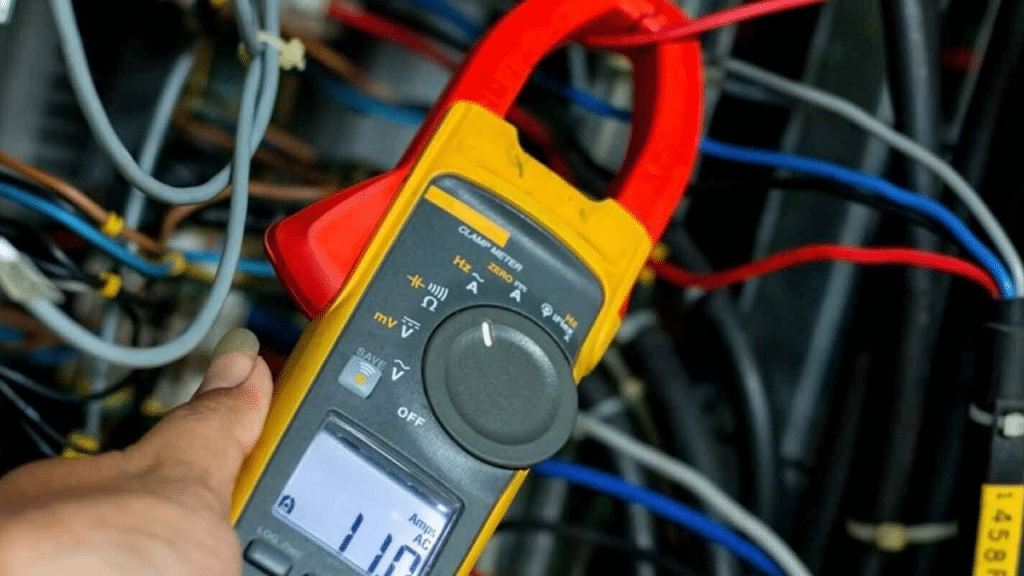 How Does An AMP Clamp Meter Work?

The amp clamp meters operate according to the principle of the current transformer, used to capture the magnetic flux generated as a result of the current flowing through a conductor, which can be assumed as the primary current and can obtain a current proportional to the primary current by electromagnetic induction from the secondary side of the transformer that is connected to a measuring circuit of the instrument. After the current flows in a coil with a certain voltage, which will be directly processed by the components making up an amp clamp meter and then sent to display. 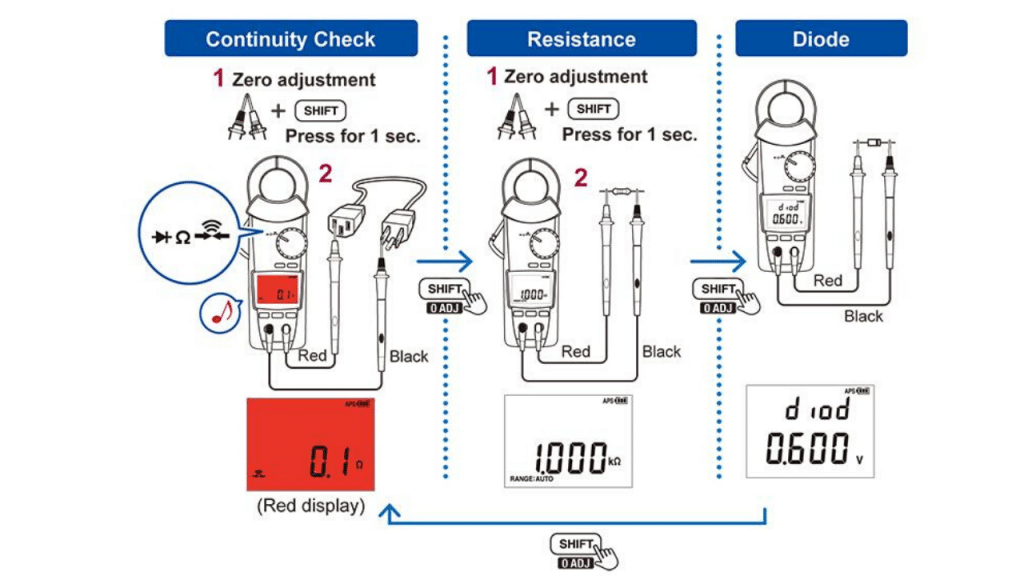 The working principle of this display is to use the working principle of a rotary coil measuring instrument, which works on the principle of the existence of an electric coil, which is placed on a magnetic field produced by a permanent magnet, which will cause the current to flow, and thus rotating the coil. As the coil rotates, the pointer rotates according to the amount of electric current entering the coil of the amp clamp meter and thus we get the current reading.

Why Is It Important To Use An AMP Clamp Meter To Measure Current?

If the current flowing on a network will be measured while not allowing cutting the network to connect the amp clamp meter or through a current transformer, if the network is cut off then the power supply will be stopped, the use of an amp clamp meter is a very good problem-solving, as it will not disturb the current-carrying conductor, the clamp just wraps the conductor wire. 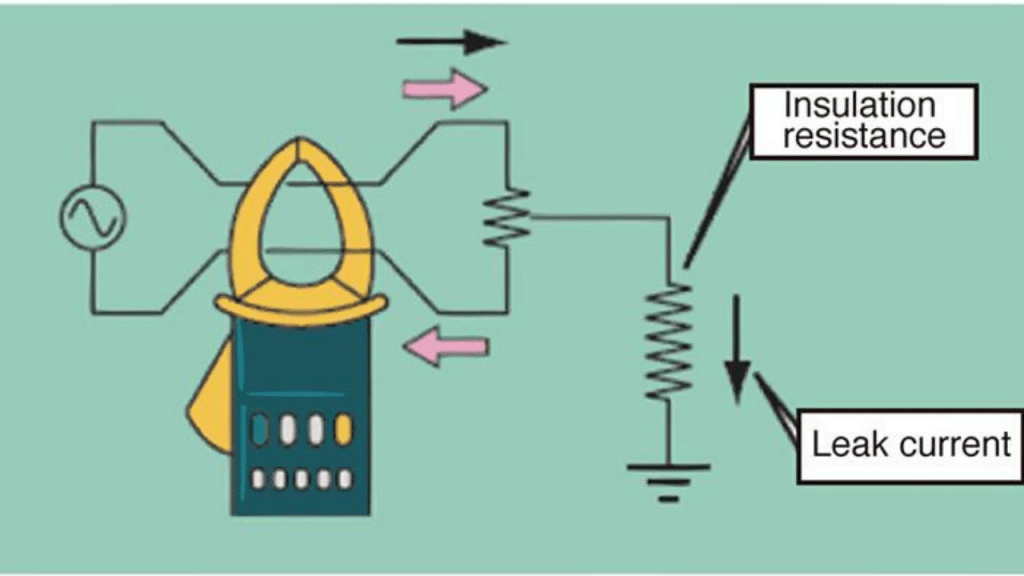 Some Safety Precautions To Be Taken While Using An AMP Clamp Meter: 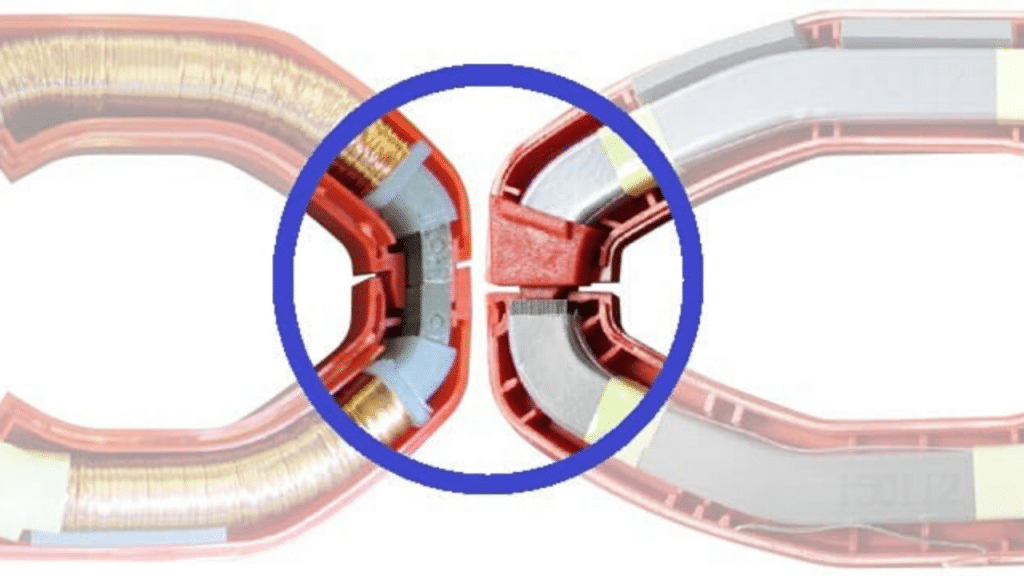 An amp clamp meter measures current via the non-contact method, making it safer and less troublesome to acquire a measurement. It usually has additional measurement functions such as voltage and continuity. A clamp meter typically requires an annual calibration to ensure that it continues to make measurements within the manufacturer’s specification. 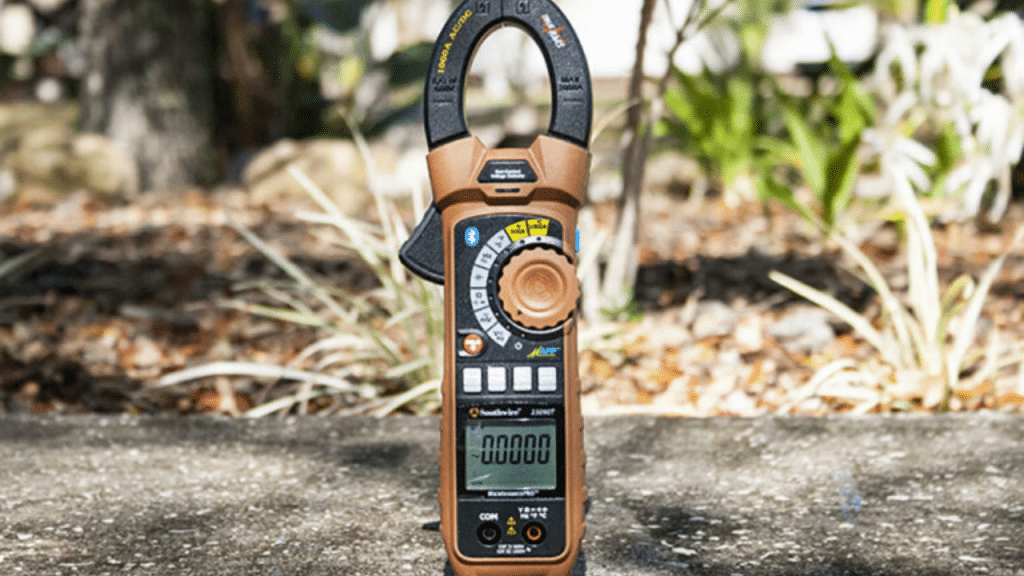 How To Use An AMP Clamp Meter?

Finding the ideal amp clamp meter can be frustrating as there are so many great models to choose from and can exhaust your whole day just making your pick. Buying the best clamp meter should depend on factors like accuracy, functions and features, resolution, and durability. Prominence should be given to the environment where the meter will be primarily used. You can buy them from geekyviews which provide you with the privilege of choosing the product of your choice from an ocean of products with descriptions to reduce your tension of which one to buy?

How does an amp clamp meter work?

Clamp meter for DC works on the principle of the Hall effect, as its sensors sense the magnetic field caused by the flow of the current which causes a small voltage across the Hall effect sensor. This voltage is proportional to the current is then amplified and measured.

What is a clamp meter good for?

DC Clamp meters are generally used by electricians, sometimes with the clamp collaborated with a general-purpose multi meter. It is very simple and easy to measure very high currents, with the appropriate current transformer.

What does a clamp meter measure?

Clamps measure current while probes are used to measure voltage. Having a hinged jaw collaborated with an electrical meter allows the electrician to clamp the jaws around a wire, cable, or other conductors at any point in an electrical system, then measure the current without disturbing the circuit of the conductor.

Should I buy a multi meter or clamp meter?

A clamp meter is capable of measuring current in a conductor, while a multi meter is built for measuring multiple parameters like voltage, resistance, continuity, etc. The main difference between the two is that a clamp meter can measure high current while the multi meters have high accuracy and resolution.

Can we measure DC with clamp meter?

As you may know that current can be used to generate heat as well as magnetic fields, which are widely used for motors, inductor, and generators. You can make use of the Clamp meter for automotive use or clamp meter with temperature, or DC clamp meter or clamp meter for DC as they are some of the modern clamp meters that can measure both AC and DC.

The mark of a professional electrician is that he upgrades his tools based on the latest industry standards, as he keeps himself up-to-date with current news about technologies in the field and tries to incorporate them into his work. Anyone can go around with a multimeter but only a proficient electrician will carry and know how to use an amp clamp meter. So it is high time now that you understand what they are capable of and make one a part of your toolkit, as owning a clamp meter is like having a certification and it automatically elevates your image as an expert.

Top Rated Marble And Plastic Cutting Board For Your Kitchen