Latest 6-axis flight control system with adjustable gyro sensitivity. Very easy to fly - novice to expert. Can charge through USB from your computer! Completely pre-assembled, no construction required! Fun straight out of the box! Includes 4-channel digital proportional RC system. Get off the...

3DR Solo Drone Review. Drones have made aerial photography and videography more accessible than ever before, but getting professional-looking shots is still fairly tricky. Unless you’ve had years of practice, it’s pretty difficult to fly a drone and control a camera at the same time. The 3DR Solo Drone is specifically designed for shooting aerial video and equipped it with a range of autonomous flight modes that make it easier to capture those smooth, sexy, professional-looking cinematic shots.

Here is our 3DR Solo Drone Review (By GeekyViews Experts)

? If you have used or if you are using this drone, please leave your 3DR Solo Drone review in the comments below and help our readers choose.

The score is given after real-world test by the expert. Pros and Cons are also mentioned. If something is missing in 3DR Solo Drone Review and Specifications then feel free to add them in the comment section.

The 3DR Solo is fairly large at just under 19 inches from tip to tip, and heavy: with the battery, gimbal and camera installed, it weighs in at a hefty 3.35 pounds. That means it needs to be registered with the FAA, as it is over the 0.5 pounds minimum weight. Solo has a max distance of about a half-mile. That’s definitely not huge (less than half of what the Phantom 4 can do), but it was more than enough for our needs.

The drone becomes difficult to see after about a quarter-mile, but the live 720p HD video feed will stay intact on the controller for double that distance if you’re flying out in the open. It’s an angular lump of matte black plastic and bright multicolor LEDs under each motor that displays the status. These are easily visible in daylight and are rather bright at night. In flying mode, red indicates the front of the quadcopter and blue the back.

1. 3DR Solo Drone is the only drone on the market right now that boasts not one, but two dedicated 1GHz Cortex-A9 Linux computers. There’s one in the controller and one on board the drone itself that handles all high-level flight scripting, freeing Solo’s Pixhawk 2 autopilot to focus solely on keeping the copter in the air.

2. It is built for autonomous flying, unlike many drones. Much of the processing power that helps it fly is built into the drone itself, rather than the controller or the phone. For instance, you can set the drone to Orbit, then put the controller down and do something else as its films and circles.

3. This drone can fly like a bat out of hell. 3DR doesn’t boast about it very much, but Solo can hit over 55 MPH if you take the training wheels off. If you need a drone that can keep up with a car, motorcycle, snowboard, mountain bike, or anything else that moves fast, Solo would be a fantastic choice.

4. It offers a full spectrum of flight options. It’s got everything from fully unrestricted manual control, all the way up to totally autonomous, push-of-a-button flight — and everything in between. 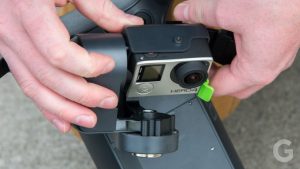 3DR Solo Drone cannot take photos and video without an added device. Instead, it works with a GoPro camera, which connects to a control cable and an HDMI cable that feeds the video back to the drone and the controlling app. The resolution and frame rate of these videos depends on the type of GoPro you use, but with a GoPro 4 Hero Black, I could shoot 4K video at 60 frames per second.

GoPro 4 users also can control the resolution and frame rate of the video from the app. There is a gimbal which holds the camera steadily in place and allows the camera to move independently, pointing left or right and up and down.

The 3DR Solo Drone is equipped with a rechargeable 5,200 mAh 14.8Vdc lithium-ion battery, which allegedly gives it 25 minutes of flight time without the camera and about 20 minutes with it. It takes roughly 1 hour and 35 minutes to recharge each battery — so we highly recommend buying a few of them if you plan to use Solo for any kind of serious videography.

The base price of the Solo bundle is fairly cheap at $400. This drone requires extra batteries which aren’t cheap, 3DR sells the batteries for $149 each, and there are no third-party batteries available. You will also need to add your own GoPro to capture video, which will cost you between $100 and $400, depending on the model.

Solo also comes with a range of different attachments for your GoPro — including a fixed amount that’s compatible with any GoPro case, a vibration dampener attachment, and if you shell out an extra $299, a three-axis gimbal for stabilization.

What size Memory Card would you recommend?

All depends upon what you wish to do with it. However, the flight time of the drone isn’t all that spectacular which means that you just’ll have time after you kill the battery to obtain no matter footage you find yourself with properly earlier than you’re capable of recharge it. Suggest buying a further battery if in case you have occasions you’re going to wish to have prolonged flight time at.

I consider it does, although I’ve by no means used it.

Can you get controller separate?

Sure, you may. The controller is NOT required to function the drone, You’ll be able to merely fly the drone along with your cellular gadget. However, distant management permits you to have better flexibility, distance, and management of the plane.

Can you use this for fishing ?

No too small danger of shedding it in water.

I feel it’s applicable, it’s an enjoyable drone and really aware of the distance. I’d allow them to apply just a few instances earlier than simply letting them exit and play with it. It’s solely a few 15 min flights so get just a few batteries.