Drones have been evolving quickly in the past few years, but lately, they have entered a new era. Instead of stuffing them with every feature known to man, manufacturers are building them with features and specs that target a particular type of use — like racing, FPV, or filmmaking. The Hover Camera Passport from ZeroZero Robotics is a prime example of this trend.

? If you have used or if you are using this drone, please leave your Hover Camera Passport Drone review in the comments below and help our readers choose.

The score is given after real-world test by the expert. Pros and Cons are also mentioned. If something is missing in Hover Camera Passport Drone Review and Specifications then feel free to add them in the comment section.

The Hover Camera Passport Drone is a small, portable drone designed to take photos and videos and doing some more cool stuff. It is very easy to fly and has face-and body-tracking technology. It is so much stable and portable that it can fold up to the size of a small book. This pocket-friendly sized drone records aerial footage and helps in taking photos on-the-go. is only 18.2 x 13.2 x 3.3 cm when folded, which is one of the most portable pocket drones in the market.

On top of this, it is also very lightweight, only weighing 242g. Still, the drone’s small size comes with some limitations. While you can buy 100 selfie sticks for the price of this $499 drone, it can capture images from vantage points that you might not reach if all you had was a long pole. It is highly resistant to crashes and hits because of its carbon fiber frame.

1. The single most significant feature on the Hover Camera Passport Drone is definitely its foldable design. It is one of the most portable drones in the market right now. It’s intentionally built to fit inside a backpack or purse, so it’s always with you whenever you need it.

2. The Passport Drone comes with a suite of autonomous flying/filming modes. In addition to standard ones like Orbit and Follow, it has a 360 Panorama function you can activate with the touch of a button, as well as a thing called Beast Mode, which lets you turn off the drone’s software-imposed motor limitations for those times when you need to follow really fast objects.

3. Another feature of the Passport Drone is carbon fiber prop cages, which provide it with a number of big advantages. First and foremost, they protect the propellers from run-ins with obstacles, which drastically reduces the likelihood of a crash. The propeller guards also protect the pilot from the spinning blades, which makes it safe to launch the drone from your hand, or even pluck it out of the air when you’re done flying.

4. A fun feature of the drone is the capability to orbit around its target automatically, without any user input, while recording video or taking photos. The drone is easy to operate and can move together with the target.

5. The Hover Passport doesn’t have its own physical controller; rather, you have to use the drone’s app on your iOS or Android device, which you link to the Hover via Wi-Fi.

6. The Passport has 32GB of onboard storage which, unfortunately, can’t be removed or replaced. You can transfer images and videos from the camera either wirelessly to your smartphone or through a USB port on the side of the Passport. 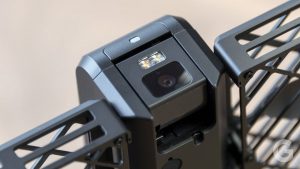 The Camera quality is one of the highlights of this amazing foldable drone. The built-in 13MP camera has a 1/3.06 inch CMOS sensor and a lens with 78.4 degrees Field of View. It’s not only capable of recording 4K video at 30 frames per second but also does 1080p and 720p at 30fps too.

It also doesn’t have a gimbal and relies on a combination of digital stabilization and a single-axis swivel to stabilize images. Effectively, this means you’ll need to shoot in 1080p if you want smooth video since the 4K video is only stabilized along one axis and will likely be shaky.

The drone transmits high-quality live video via WiFi directly to the pilot’s smartphone device. The FPV video is displayed on the screen through the app. The maximum FPV distance can be up to 20 meters(65.6 feet).

In addition to the face and body tracking software that locks onto your subject, the Passport also features a built-in flash, which makes it ideal for snapping selfies and group photos. The drone has a maximum image size of 4208×3120 and an ISO range of 100-3200. The storage capacity for all these files is 32G.

The Passport can stay in the air for about 10 minutes. Fly it a bit harder, and you can expect a drop of anywhere from 1-2 full minutes. When the drone is fighting a breeze or following you with all its might in Beast Mode, it’ll sap juice from the battery at a noticeably accelerated rate — but even so, it will never dip below 8 minutes in our most rigorous tests.

It ships with two lithium-ion batteries, so you can expect about 17-19 minutes of total flight time if you set out with both cells fully juiced up.

Thus, providing a flying time up to 10 minutes (depends on the flight conditions and functions being used). As for recharge time, the batteries take an average of about 50-55 minutes to power up and reach 100 percent again.

The average price of the Hover Camera Passport Drone is around $499. The additional batteries cost $45 each.

Does this drone has obstacle sensors?

Sure, it has sensors on the entrance and backside of the drone. It additionally has some sort of sensing to detect if it hits one thing whereas going up. Mine hit some branches of a tree as soon as and it stopped and lowered altitude a bit after which hovered.

Can police track your drone?

As a result of there isn’t a present methodology of reliably monitoring the gadgets, current laws sometimes require civilian hobbyists and industrial operators to maintain their drones inside 400 toes of the bottom and within reach.

Can the Spark be flown indoors?

It might probably. I might go very slowly and have the prop guards on. This can be a quick drone so for those who primarily wish to fly indoors there are less expensive choices.

How long does it take to charge a battery via included usb cable?

Do Military drones have weapons?