Parrot AR Drone 2.0 Review. The Parrot AR Drone 2.0 is among the very best quadcopters ever produced by the Parrot Company and is an improvement on the earlier version, Parrot 1.0. Not much has been improved in the design, but a lot has improved in its performance. It serves best if you need a cheap drone that is both lively and swift.

It also has a stable balance when shooting videos and pictures, like no other drone. You can read more about the specifications, features, camera quality & specifications, battery life, price, and more in the Parrot AR Drone 2.0 Review and Specifications.

Here is our Parrot AR Drone 2.0 Review (By GeekyViews Experts)

? If you have used or if you are using this drone, please leave your Parrot AR Drone 2.0 review in the comments below and help our readers choose.

The Parrot AR Drone 2.0 features two built-in cameras, it is very easy to fly, and can be controlled without too much danger of it flipping over or smashing into things. If you want a satisfying flying toy that can take photos and (silent) videos and makes you feel like a gadget genius for controlling it with your mobile device then Parrot AR Drone 2.0 is the best drone you can go for.

The looks of the AR Drone 2.0 is very similar to its earlier version. It is quite robust in size and it has, of course, four propellers that enable it to navigate while on air.

1. The drone is capable of stabilizing itself easily and it can take stable images while performing airborne drills.

2. The outdoor and indoor hulls are designed to protect the drone’s propellers from breaking. In addition, the drone has been crowned with sensors to detect its altitude, the distance from the controlling device, and an additional feature that enables it to be located by the GPS. These sensors enable the drone to refrain from flying to uncontrollable distances like its predecessor. With the indoor hull, no matter how many times the drone will crash, it is less likely to break.

3. The AR.Drone 2.0 doesn’t come with any sort of controller, because it relies on an Android or iOS device connected to a Wi-Fi hotspot the drone generates. Yes, you need a tablet or smartphone to pilot it.

The Parrot AR Drone 2.0 has two cameras: A powerful front camera and a less powerful camera located at the lower part of the drone adjacent to the pressure detector. The front camera is capable of doing a full 720p HD video recording. The camera also streams images at a speed of 30 frames per second to the controlling device.

The mobile app handles all recording and storage, so any video or photos you take are automatically added to your smartphone or tablet; the drone doesn’t have any onboard storage. It doesn’t record sound, because the drone’s rotors would drown out any audio it could capture. Video quality is decent indoors, but don’t expect anything better than what you’d shoot with an inexpensive smartphone. 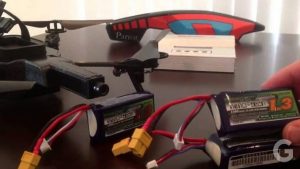 The standard Parrot AR Drone 2.0 has a single 1000 mAh Lithium-Ion battery. It takes about an hour to fully charge the battery, yet it drains within 8 – 12 minutes when in continuous use. Perhaps this could be the drone’s main drawback. It takes a lot of energy to keep a drone aloft, and that means you’ll be swapping or charging batteries about every 10 minutes.

A full charge on the battery gives the Parrot AR Drone 2.0 about 12 minutes of flight, which isn’t very impressive but on par with other remote-controlled drones. The battery charges with the included AC adapter, and it takes approximately an hour and a half to fully charge.

You can opt to buy multiple batteries. With many batteries, you can choose to use one battery as you charge another. There is also another edition of the Parrot AR Drone 2.0 which is the Power Edition that comes with two 1500 mAh HD power batteries that can last up to 20 minutes each enabling one to gain a longer flight time. But unless you’re willing to invest in either the Power Edition or additional batteries your flights will have to be short and sweet

The Parrot AR Drone 2.0 is currently priced at $250 – $300. A typical normal drone battery costs about $40. Usually, the Power Edition also comes with two batteries and is priced about $50 -$70 above the normal drone.

Can it be charged in european AC as well?

Sure, it may be charged. But You should get a US to EU Plug Adapter to attach it in Europe.

Does it come with the battery charger?

Can you fly it out of the box without buying anything else?

This depends upon what package deal you buy. Some packages don’t include the hand-held distant and you could purchase it individually. The “Fly Extra” combo will include every little thing you want.

What is the video transmission range?

It’s presupposed to be 500 meters, nevertheless, it depends upon the fly situations.

Does it come with propeller protectors?