Parrot DISCO FPV Drone Review. Parrot has been making quadcopters and hexacopters since its first AR. Drone in 2010, but opted to go in a different direction with the Disco: a fixed-wing unmanned aerial vehicle (UAV) that flies very differently from the others. With the majority of today’s consumer-level drones being quadcopters or hexacopters, appreciated for their vertical takeoff and landing, Parrot decided to go down a less-traveled road with the Parrot Disco, a fixed-wing UAV with a very different flying style.

The Parrot Disco FPV Drone has all the advantages of a fixed-wing UAV, with bigger payloads possible, meaning more sensors and technology in general, all while being able to cover longer distances at higher speeds. The simple but rigid structure means less maintenance and more operational flight time. Read more about this Fixed Wing Drone and its specifications, features, camera performance, battery life, price range and more in Parrot DISCO FPV Drone Review and Specifications.

? If you have used or if you are using this drone, please leave your Parrot DISCO FPV Drone review in the comments below and help our readers choose.

The score is given after real-world test by the expert. Pros and Cons are also mentioned. If something is missing in Parrot DISCO FPV Drone Review and Specifications then feel free to add them in the comment section.

Parrot DISCO FPV Drone dimensions are 1150 mm x 580 mm x 120 mm, with a wingspan of 1150 mm (45 “). Despite the size, it’s both lightweight and robust, at just over 0.7 kg. The Drone consists of a Cockpit glass headset and a Skycontroller 2 with a size adjustable support for holding your smartphone or tablet.

Its body is made of Expanded Polypropylene (EPP) foam and carbon tubes for reinforcement. There’s a sole propeller in the rear to give it lift, with winglet tips on the wings protruding up for better steering.

It uses the same 14-megapixel camera Parrot built for the Bebop 2, albeit with some software improvements to improve image quality. That is attached to the electronic box called C.H.U.C.K. (Control Hub and Universal Computer Kit), which includes a connector for the 2,700mAh battery. There is 32GB of internal storage onboard, without any memory expansion options.

There’s also a micro-USB port for direct connections to PCs and Macs – but it’s only for content transfer, not for charging. The battery has its own charger requiring a wall outlet. The sensory technology onboard includes ultrasound, altimeter, camera, and speed sensors. A three-axis gyroscope, accelerometer, magnetometer, and GPS make up the internal navigation system. 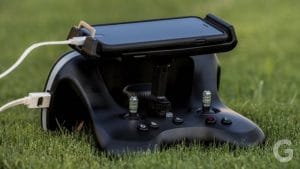 1. The Parrot Disco was designed to fly with the plane always facing right side up, with no tail and no elevator. The ailerons working together can act as an elevator, so you can roll the drone, with the lift turning it through the turn. However, it is clear it was not designed with aerobatics in mind.

2. The flight characteristics are impressive, with a top speed of 50 mph due to the brushless motor, a max altitude of 492 ft, 45 minutes of flight time, and a range of 1.2 mi. The stability of the flight is due to the algorithm for assisted piloting developed for the C.H.U.C.K, which always monitors flight parameters and prevents stalling while the user makes critical maneuvers.

3. There are two landing modes for the Parrot Disco. One is straight in landing, where you come into the wind, push the land button, which reduces the power while bringing up the nose, which plops the thing down perfectly; the other option is a circular landing, with the UAV coming back to where the home point is, going into a huge spiral, and gradually landing.

The second option does need an area at least 80 m across. The spiral landing is also performed when the drone gets disconnected for some reason or exits the designated flight area (geofencing), in which case it will “return home” and initiate the landing.

4. Right before landing, it uses sonar sensors on the bottom, so the aircraft brings its nose up and then safely touches down.

5. The aircraft just needs to be on a flat surface and you simply push button on top of the Pitot Tube. At this time, the button flashes blue, the UAV goes through some self-checks, and once it’s flashing green, it means the aircraft systems are ready, the GPS is enabled and it’s prepared for takeoff. At that point, you are able to connect to the phone/tablet and level out all configurations. 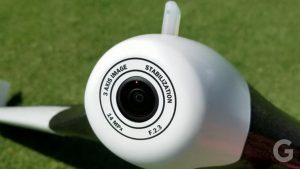 The Parrot Disco uses a 14 Megapixel 1080p Full HD camera with 360p / 720p video streaming, the same Parrot used for the Bebop 2, although there are software improvements for better image quality. It is connected to the C.H.U.C.K, and there is a 32 GB internal storage, with data transfer possible to a PC or Mac via a micro-USB port.

The camera can be tilted digitally 180° towards the ground, and with its 45 minute flight time, the drone could also have commercial applications or perform SAR missions, while other more powerful drones are being prepared. Users get the footage through the Parrot Disco’s Full HD 1080p camera, and this simulates the experience of flying. 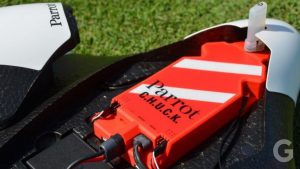 Parrot Disco’s Battery life is far better than just about any quadcopter. It has a 2700 mAh / 25 A 3-cell LiPo Battery. It connects to the C.H.U.C.K (Control Hub & Universal Computer Kit) via an XT60 connection actually called XT60 Plus. At first glance, it looks a little different, because it has been packaged in a nice black box with Parrot written on it, but it’s still possible to change it to any other XT60 connectable battery.

Its battery life is normally 45 min, although there are cases of people putting in bigger batteries and going beyond an hour and a half of flight time, and more than 40 miles of total flight.

The average price of Parrot DISCO and the FPV kit is around $1000.

Do drones fly at night?

This exception to the rule implies that Half 107-licensed drone pilots can fly in the evening without a waiver so long as they don’t partake in any industrial drone flight exercise. As an apart, the FAA requires that the intent of the drone flight be decided at take-off.

What shooting modes does it have?

It has your commonplace mode, it additionally has a tripod mode which permits for a gradual movement whereas taking movies. The Spark has a monitoring choice that means that you can choose a topic and it’ll transfer with that topic whereas recording. Comes with preset modes similar to circling, spiral upward, and selfie-zoom out mode.

Does Mavic Mini have lights?

It solely has a single mild within the rear and nothing else. Compared, greater drones have 4, one on every foot or propeller, however, the Mini doesn’t have them.

What DJI drone should I buy?

The DJI Mavic 2 Professional stays the perfect premium drone you should buy for a couple of causes – it has a big sensor, it is a pleasure to fly, and the foldable design makes it transportable and travel-friendly. When you want to zoom or critical portability, then the Mavic 2 Zoom and Mavic Mini are value investigating.

Can I shoot video indoors with this product?

Positive! You’ll have to flip off the collision sensors to fly indoors but it surely works for those who’re cautious. Prop guards are a good suggestion indoors. You’ll be able to shoot video strolling around holding the drone in your hand if you wish to.