Aside from the weird name that given to this drone, the Parrot Rolling Spider Drone is actually one of the most popular and loved drones on the market. This is mainly due to a bunch of interesting features offered by the manufacturer at a price that’s considerably fair. Something that you will notice about the drone is the fact that it looks pretty regular.

? If you have used or if you are using this drone, please leave your Parrot Rolling Spider Drone review in the comments below and help our readers choose.

The score is given after real-world test by the expert. Pros and Cons are also mentioned. If something is missing in Parrot Rolling Spider Drone Review and Specification then feel free to add them in the comment section.

The Parrot Rolling Spider Drone is a quadcopter, like its older sibling the AR Drone, but it’s a fraction of the size, and the spare design lives room for only a small vertical camera that faces downwards and is used for flight stabilization. The Parrot Rolling Spider Drone is a Bluetooth LE-enabled quadcopter you control with your phone. It’s the latest flying drone from the company that helped popularize smartphone-controlled copters for consumers with its AR Drone products.

Weighing only 55 grams and small enough to land on your palm, this tiny take on the quadcopter is great for flying indoors. The big detachable wheels on the sides give the Rolling Spider a bouncy barrier as it plummets to the ground or ricochets against the ceiling. 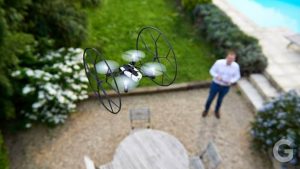 1. When looked closely, you’ll notice that this quadcopter features an ultrasonic sensor, a 3-axis accelerometer, a 3-axis gyroscope, and a pressure sensor for stabilization and better flight movement.

2. The two big wheels that allow you to drive the quadcopter on the floor as a remote-controlled car, and also prevent it from bumping into walls/ceiling when flying indoors. This makes it both beginner-friendly and something that a regular drone pilot would like to do for a change.

3. Since the Parrot Rolling Spider Drone actually includes pressure and an ultrasonic sensor, you can practically drop it on purpose and turn on the drone mid-air. This will make those sensors come into play and correcting the position to give you a stabilized drone that’s ready for you to fly.

4. Your Smartphone acts as a controller by connecting to the drone via Bluetooth. There are many types of controller presets to choose from and you can also adjust the height/speed limit from within the app.

5. You can record footage of your drone in action through the app itself.

The Parrot Rolling Spider is a quadcopter, like its older sibling the AR Drone, but it’s a fraction of the size, and the spare design lives room for only a small vertical camera that faces downwards and is used for flight stabilization. Since you control the drone through your phone (more on that in the controller section), you can actually double up your phone’s camera to take some pictures and record videos of the quadcopter in action.

However, the video doesn’t support audio records so you won’t get any audio from the recorded file. With such a recording system, you get the freedom of choosing the quality. That is, the better the camera quality of your smartphone, the better result you get. Also, if you are an enthusiast and record videos in higher resolutions such as 4K, the inbuilt storage in your phone can be really useful since higher-res videos tend to be very heavy and use up more than 8 or even 16 GB of storage.

The exclusion of a camera on the front of the drone allows for an inbuilt camera to be fitted on the bottom of the drone, which allows you to take drone selfies. The best part is that you get rid of the hassle of transferring from an SD card to a computer in order to upload your files.

The inbuilt camera is not anything spectacular since it only has a resolution of 0.3 megapixels or 640*480 pixels so obviously, you can’t expect the best quality out of it but it should be enough to get the images of awed faces who watch your drone as it passes by. 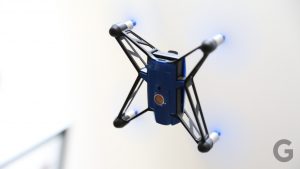 The Parrot Mini Drone Rolling Spider actually disappoints a little bit in the battery department. Even though the drone includes a 550 mAh rechargeable battery, you only get a total flight time of 8-9 minutes. It also goes without saying that there are spare batteries available for sale by the company itself. An extra 550 mAh battery will set you back for around $20, which is a fair price.

The drone takes a total of 90 minutes to charge according to the company, which is true in real usage as well. However, there are some things you need to know about the proper way of charging your drone batteries and you can read our article about drone battery life and the ways to make the most out of them.

You can find the Parrot Rolling Spider Drone in the market at around $100. It isn’t the most budget-friendly drone or the one that provides ‘bang for the buck’ either. However, the price isn’t too high by any means.

Do I have to register my drone with the faa?

Sure. As of 2018 all drone weighing greater than .5lbs once more must be registered (spark is .66 I feel). Exhausting to comply with on FAA web site however here is a hyperlink with normal information:
https://www.engadget.com/2017/12/12/trump-signs-bill-requiring-drone-registration/

Mp4 is the video format.

The data cable for connecting the controller to the phone is included in this package?

You cannot join the drone to the cellphone by a cable (in any other case it ought to be 500 meters to fly away)
Possibly you imply the distant controller? This one connects additionally by WLAN, however, you should utilize an OTG cable for that.
The Spark comes with a distance solely within the fly extra combo or in that provide (free distant management…)

Does this drone shoot vertical video?

Can I take this drone on an international flight?