Ryze Tello Drone Review. At a time when there was just DJI Spark that was used as a flying camera which could perform all manners of acrobatic aerial maneuvers for very much around $400, Ryze entered the drone industry featuring DJI’s coveted flight tech, 720p video recording, VR compatibility and one-touch 8D flips (which even the Spark can’t do), it almost seems insulting to label it a toy. And at just $100, it effortlessly soars above the pellet-flinging mini-drones we’ve seen in the same bracket.

The Ryze Tello Drone can mimic some of its best party tricks for less than a third of the price, and one that you would be happy to hand over to the kids!? In case if you haven’t heard of Ryze before, they are a Chinese startup. At the same time, DJI is closely partnered as a supplier providing its flight stabilization technology and selling the tiny flier on its online store. You can read about the specifications, features, camera performance, battery life, price range, and more in the Ryze Tello Drone Review And Specifications.

Here is our Ryze Tello Drone Review (By GeekyViews Experts)

? If you have used or if you are using this drone, please leave your Ryze Tello Drone review in the comments below and help our readers choose.

The score is given after real-world test by the expert. Pros and Cons are also mentioned. If something is missing in Ryze Tello Drone Review and Specifications then feel free to add them in the comment section.

The Ryze Tello Drone really is a little dinky thing when you first see and hold it. Whereas we could hold the DJI Spark in an outstretched hand, the Ryze Tello neatly fits into just our palm. Measuring just 98 x 92.5 x 41mm and weighing 80 grams, it’s an incredibly small drone compared most of the airframes we have reviewed.

Tininess aside, it’s clear that the Tello takes inspiration from the Spark. Both drones share a similar two-tone look and body shape. That said, the Tello gets rid of redundant landing gear and instead extends the bottom of its rotor arms to act as its feet. The result is an even shorter, more compact airframe that should be easier to fly indoors.

It can be controlled in three ways: through an app, remote control, or through the Scratch programming interface. The Tello app is free for iOS and Android smartphones. This provides a touch-screen interface to control the drone as well as a preview of the image from the camera. It’s a simple program to use and provides a good level of control for beginners and experienced fliers. Photos and video are saved through this app: The drone itself does not have any storage. 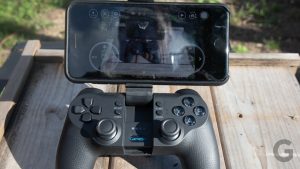 1. It packs the same flight stabilization technology and Intel Movidius Myriad 2 VPU as DJI Spark, which means you can launch it from your palm and control it with hand motions.

2. Tello pulls off a few tricks you won’t find even on DJI’s drones. For one thing, the control interface includes a flip button for being fancy in the air or dodging any Nerf darts at a party. There are also several flight modes, including ones for shooting a quick 360-degree video and having the drone fly away and upward from you in one smooth motion.

3. Ryze Tello owners will also be able to program their own flight patterns at home, using an included coding tool called Scratch.

4. With a Google Daydream VR-like phone holder, Tello owners will also be able to jump into a POV flying experience.

5. The Tello is programmed to land safely even if you lose connection, so unless it’s helplessly swept away into next door’s garden by a gust of wind (more on that later) you can afford to get a bit adventurous. You’ll also get low battery indicators to make sure you bring her down before experiencing a mid-air cookout. 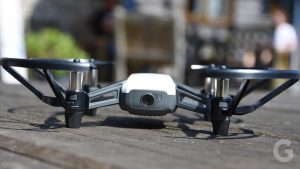 The drone’s camera utilizes a 5MP sensor that can only record 720p videos, this is one of its standout features. Okay, the understandably small sensor (1/5in) and relatively low 4Mbps bitrate mean the footage is better suited to social media rather than your 4K telly, but the Tello is surprisingly capable in gloomy indoor situations.

Once you’re airborne you can switch between video and photo modes at the tap of an on-screen button, and I was able to record for upward of a minute at a time. There’s an Intel 14-Core Processor on hand to handle the footage, as well as Electronic Image Stabilisation (EIS) to ensure your shots don’t have the shakes.

The three modes are pretty self-explanatory: you’ve got Up & Away, which sends the Tello flying upwards and backward while recording Circle, which records while flying in a circular movement, and 360, which shoots a video while spinning 360 degrees in one spot.

The 1100 mAh battery that powers the Tello has a flight time of a maximum of 13 minutes, compared to the Spark’s 16-minute battery life, although it’s astonishing that a drone this small can fly for so long.

You won’t be going anywhere quick with this drone either – its max speed tops out at an 8m/s, and you’ll only be able to fly it outside when there’s no wind at all. In addition, the drone has an annoying habit of turning itself off after about 30 seconds if it does not detect a Wi-Fi connection. If you are struggling with trying to get the software running, that isn’t long

Priced at just $100, the Tello brings some serious performance to the world of tiny drones. Its spare batteries are easily available and cost $18 each. There is also an optional charger that can charge four batteries at once for $24. Other spare parts are widely available, including different colored shells for $8 and a spare set of rotor blades for $2. One set of spare rotor blades is included with the drone itself. 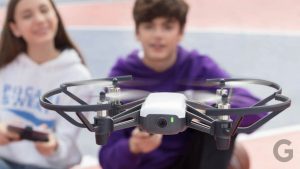 Does this come with 1 battery ?

Sure one battery. The flight time is roughly 25 minutes. I simply ordered one other battery. Actually impressed with this little drone. Quick, steady, and strategy to fly.

Is the camera on a gimble?

Sure, it is a 2 axle gimbal if I am not mistaken.

Can you view in a screen or so as the drone is flying?

You slide your cellphone into the holder on the distance. That is your display screen. My son watches his display screen/cellphone whereas flying. It takes a little bit of applying to be sure to avoid energy traces and bushes… must gauge the gap from objects whereas watching the cellphone display screen. He’s 17 and it is an excellent first drone.

What does it come with?

Mine got here with a controller and a battery. It’s usable out of the field.

Dorsal it come with a case?

It comes with an inexpensive styrofoam case for the drone that the controller received match into. You have to buy a separate case should you want one.