However, physically it is a complete makeover to the original release. It has a slimmer look and has a hardware revamp that incorporates a makeover of both console and controller. Sony currently has not one but three new PlayStation devices, namely, PS4 Slim, PS4 Pro, and PSVR.

The Pro version is a 4K-compatible version of the PS4 and the PSVR is a VR headset that works in any PlayStation devices. You can find out more about the PS4 Slim’s design, features, specifications, controller, performance, price range, and more in the Sony PlayStation 4 Slim Review and Specifications.

Here is our Sony PlayStation 4 Slim Review (By GeekyViews Experts)

This score is given after in-depth analysis and going through of the product by our experts. The Pros and Cons are also mentioned. If something is missing in the Sony PlayStation 4 Slim Review And Specification then feel free to add them in the comment section below.

Sony has given the Slim version a complete makeover physically to the original PlayStation 4 version. This refreshed console has a slimmer new look, a few new features, and even some minor internal upgrades. One of the most important elements of change from the previous version is its processing power. The feel of its controller in your hand also might differ from the previous controller.

However, the library of games available on the PlayStation Store has not changed. The Sony PlayStation 4 Slim is built in a way that makes it appear underwhelming in comparison to the PS4 Pro. The PS4 Pro boasts a significant boost to performance, 4K gaming, and even frame rate improvements for existing games, making the Slim the lesser (but cheaper) console.

The PS4 Slim is mainly designed more to lure in players who haven’t bought a modern console yet to appeal to current PS4 owners. while there’s no 4K Blu-ray player or bump in-game performance to shout about unlike with the Xbox One S. It is quieter, slimmer, and less power-hungry than its older brothers, making it a decent upgrade to the original PS4. 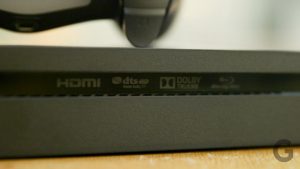 Just like the other PS4 models, it comes with two US ports that sit on the front of the PlayStation 4 Slim. On top, the console is branded with the PlayStation logo. Underneath, the console rests on “feet” shaped like the triangles, circles, and exes found on the console’s buttons. The only major casualty of the slimmed-down design is the Optical Out port on the rear. It’s a big miss for the ones hooking up older home cinema receivers or souped-up gaming headsets.

The new Sony PlayStation 4 Slim might feel slightly different individually but together they make the Slim version feel self-serious than the original model. It is meant to be played wit and not for the purpose of doing business. On the front of the hardware, the two USB 3.0 ports have been spaced out, with one sitting on the far right and the other just next to the disc tray.

It’s annoying that there’s still no rear-facing USB port, as having devices such as an external storage drive or PSVR headset plugged in permanently which make the new, slimmer PS4 look untidy.

The right side of the console once again features the iconic square, circle, triangle, and cross, but the circle is hollow to allow for the vertical stand needed if you want to place the console upright. On the back of the console, there are the same ports, the HDMI, Power, Aux for the PlayStation Camera, and Ethernet, but the optical has been scrapped.

There’s also a new slot on the back-right of the console that allows much easier access to the hard drive, for those wishing to upgrade. 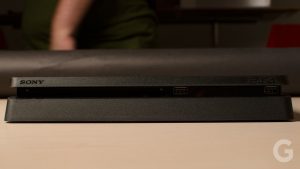 The Sony PlayStation 4 Slim Specifications are exactly the same as the original PS4 version. However, it has upgraded Wi-Fi compatibility. It now supports 802.11ac Wi-Fi, which should lead to faster download speeds and more stability playing online for those whose routers support it.

There is a new slot on the back-right of the console that allows much easier access to the hard drive, for those wishing to upgrade. A simple pinch on the cornered slot will reveal a small piece of tape that looks like film leaking from a camera and by unscrewing a single screw, you can effortlessly slide out the pre-installed SATA hard disk and replace it with another.

The console runs very quietly, except when you put a disc in for the first time. The spinning disc is noisy and creates a noticeable vibration. The ones picking up the 500GB model and anyone who already has a 500GB PS4 will know how quickly space runs out.

Every game you play is automatically installed on the replaceable 500GB hard drive, but you can still play the game while it loads. Once the install is done, you just need the disc in the drive whenever you want to play, for authentication. After installing the newest updates, you will only have about 375GB left, though. 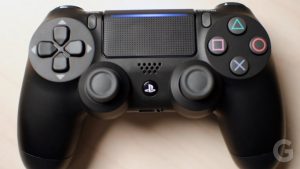 The new Sony PlayStation 4 Slim Controller has also received a slight makeover to the older Sony PlayStation 4 original version. The analog sticks, face buttons, Options/Share buttons, and D-pad have been given a new grey tone to contrast with the black of the controller. The touchpad is now translucent at the top, allowing a bar of light The touchpad is now translucent, allowing a bar of light to pass through from the lightbar on the back of the controller.

This makes it easier for players to see which color they are in multiplayer matches, but also lights some of the lightbar effects to be seen by those holding the controller. While one won’t notice the change too often unless he/she routinely holds the controller in front of their faces, it does provide easier access to the light at a glance. Overall, other than these few tweaks the PS4 Slim Controller has the same functionalities as the original one. 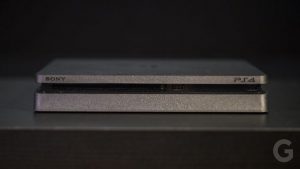 The Sony PlayStation 4 Slim Console is almost identical to the PS4 in performance aspects. There may be a slight improvement in UI responsiveness, but that could equally be down to the older console having been jammed full of games and years of use, whereas the newer machine was relatively box fresh.

It is a top-notch gaming machine, running most games at a tight 1080p/30ps, and many at 1080p/60fps. In comparison to the well-launched edition of the PS4, the PS4 Slim fan noise is noticeably quieter when in use. However, the disc drive spins up making a lot of noise when you either install a game or the Blu-Ray or DVD is playing.

The PS4 Slim stands tall against its predecessor, it doesn’t compare as favorably against the Xbox One S, which offers upgraded 4K upscaling alongside its similarly slimmed-down proportions. However, the Sony console does at least support HDR visuals, which have now been added via a software update.

The Sony PlayStation 4 Slim is priced at $300. If you want to go for a console built solely for gaming purpose then the Slim is the one you are looking for. But, if you add $100 more then you can get the Sony PlayStation 4 Pro. It is an upgraded version of the original PS4. If you want to go for even better Gaming Console then the Xbox One X is another alternative you can go for. The Xbox One X is priced at around $500. 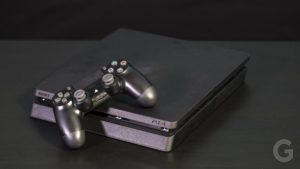 ? If you have used or if you are using this gaming console, please leave your Sony PlayStation 4 Slim review in the comments below and help our readers choose.

Is this the v2 version or original?

How many players can use this with the equipment included and are there games included?

No video games included, you may create totally different accounts however just one participant on the time.

Does it come with a screen protector?

No. But you can buy and put the cover or screen protector according to your choice.

How long is battery life last?

My husband and sons play and so they often solely play for a few hours at most, so I’m not 100% positive.

What’s the difference between v1 and v2?

There is no such difference between v1 and v2. Longer battery life for V2. but v1 is also good.

Does it require a signature?

If I am assuming appropriately that you simply imply from the Supply Particular person, they would say “Sure.”

Is this the real Nintendo Switch?

Sure, it is an actual Nintendo change.

Why is the Nintendo switch so expensive?

So, why is Nintendo Change so costly proper now? The brief reply is that there’s little to no provide out there for US retailers. That is inflicting the provision that’s out there to be marked up, principally by third-party sellers or resellers.

Is Nintendo discontinuing the switch?